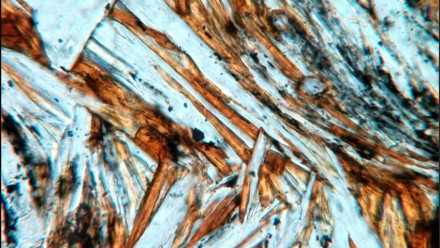 A key element in our strategy is fabric and microstructural analysis in conjunction with microstructurally-focussed geochronology to read rocks to determine the history of their evolution in space and time.

Argon geochronology is the only technique that allows direct dating of fabric forming minerals. In the Argon Partial Retention Zone information can be obtained as to the timing, as well as the duration of events - Geospeedometry - allowing a focus on rates in geological process, as well as determining how long these processes operated.

Geospeedometry is a rapidly developing field. The technique can be used to constrain the duration of thermal pulses during metamorphism by diffusion modelling of element profiles in garnet, for example. Garnet geospeedometry involves measurement of diffusive loss of an element during the entire heating and cooling history, giving information as to the time-integrated thermal response to the heating and cooling history. Currently, garnet geospeedometry is plagued by the difficulty of differentiating between growth zoning, as a result of Rayleigh-Taylor fractionation, and diffusion profiles. Development of a new geospeedometer that utilises the exchange of Fe-Mn between garnet and ilmenite inclusions will aid in solving this problem.

Argon geospeedometry is similarly difficult, being hindered by lack of certain knowledge as to the magnitude of the diffusion parameters, such as the activation energy, activation volume, or frequency factor. Other factors that need to be taken into account include fractal (or multi-scale) and multi-path diffusion.

Both the 40Ar/39Ar system and the garnet-ilmenite system, if properly calibrated, will allow determination of the duration of heating events.