The Climate & Fluid Physics group conducts research into fluid physics and thermodynamic processes that are relevant to the Earth system. Our current research priorities include oceanic convection, ice-ocean interactions, the energy balance of the land surface and the large-scale circulation of the ocean. In 2017 we changed our name (formerly Geophysical Fluid Dynamics) to better represent the breadth of research we undertake. 2017 was also the first year of the recently funded ARC Centre of Excellence for Climate Extremes, which follows on from the ARC Centre of Excellence for Climate System Science and supports the research of many in the group.

This year saw the first full year of the Consortium for Ocean-Sea Ice Modelling in Australia (COSIMA; see cosima.org.au), led by this group. We built a new version of ACCESS-OM2 (the ocean-sea ice component of Australia's ACCESS climate model) which is currently in the final stages of pre-release. ACCESS-OM2 will be released at 3 different resolutions (1°, 0.25° and 0.1°) with a consistent set of parameters. We have finalised a new topography dataset with upgraded vertical resolution for the 0.1° version (Stewart et al. 2017) and will complete a full spinup of the model in early 2018.

While developing ACCESS-OM2, we have continued to make scientific progress with our previous modelling suite. We published a significant paper on the energetics of upwelling in the Southern Ocean (Hogg et al. 2017), showing the mechanism by which winds in the Southern Ocean influence northern hemisphere ocean circulation. We have continued our work on the interaction of the ocean with the Antarctic continent, using models to show how variations in wind stress control the flow of warm water onto the coastal fringes of Antarctica, potentially controlling the rate of ice sheet melting (Spence et al. 2017). This landmark study was published in Nature Climate Change and has received significant attention.

Work on the Californian drought with ETH-Zurich scientists has led to a new understanding of the relation between drought and long-term climate warming. In particular, the warming experienced during drought has a different heating source from the warming expected because of climate change. This has opened the possibility of using new ways to separate observed changes in temperature due to changes in the long-term mean from changes in extremes. Work with another group from ETH-Zurich has also led to a re-evaluation of projections about changes in aridity over land with warming. In particular, an analysis of direct climate model output from the last glacial maximum to the year 2100 has shown that the warmer conditions associated with high CO2 are also generally associated with greening as has been observed over the last century.

At the fundamental level, we conducted groundbreaking new "internal wave resolving" ocean model simulations (Shakespeare & Hogg 2017a,b). Results from ultra-high resolution numerical modelling reveal a new source of internal wave energy in the ocean. Internal waves are thought to be responsible for mixing the deep ocean and thereby maintaining the ocean overturning circulation. Our model illustrates the process of “spontaneous generation” where waves emerge from the mean flow due to a breakdown of balanced dynamics, without any direct forcing. The figure shows how these surface generated waves propagate to the ocean bottom, potentially providing an energy source for mixing in the abyss. 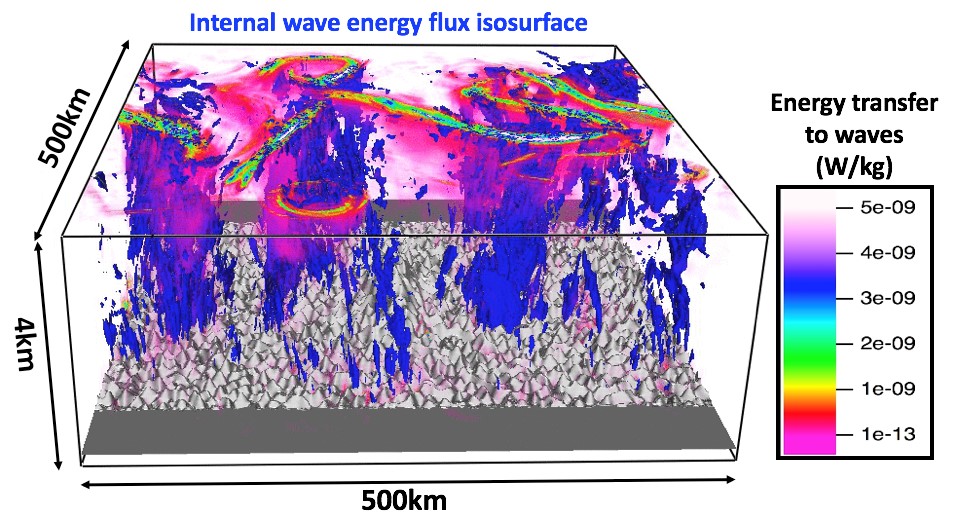 Ultra-high resolution numerical model showing the spontaneous generation of internal waves from fronts and jets near the ocean surface. Colours show the energy transfer into the downward wave field from the mean flow. The downward propagating waves are visualised by an isosurface of the vertical wave energy flux.

This year, we continued our quantitative modelling of the convective dissolution of ice in the polar oceans, using a combination of theory, laboratory experiments and direct numerical simulations. The complex boundary layer dynamics beneath Antarctic ice shelves was examined to reveal the parameter dependence of melting rate at sloping ice faces under natural convection. The effect of subglacial freshwater discharges on tidewater glaciers was quantified and compared with a common ice-ocean parameterization (McConnochie & Kerr 2017a, b). For a sloping ice face the vertical component of the salinity gradient produces stabilizing density stratification within the boundary layer adjacent to the ice face thereby reducing turbulent transport (McConnochie & Kerr 2018). We have also developed theoretical scaling solutions for the convective flow that compare well with the DNS results
(Mondal et al. 2018). In 2017, we also examined the role of convection in maintaining the circulation relevant to the North Atlantic basin. Our DNS results show for the first time that surface buoyancy forcing alone can drive substantial basin-scale sub-tropical and sub-polar gyres, along with full-depth overturning circulation. The results also show that mass transport and heat throughput are governed by horizontal geostrophic flow in the thermal boundary layer. Vertical heat transport from the surface layer into the deep interior mostly occurs in open-ocean chimney convection within the sub-polar gyre, whereas vertical mass transport is accommodated mostly against the side boundaries (Vreugdenhil et al. 2017).

Bishakhdatta Gayen was awarded the RJL Hawke Fellowship from the Antarctic Science Program, and promoted to Level C.

Adele Morrison joined the group to take up her DECRA Fellowship.

Andrew Kiss joined the group as a Research Fellow.

Catherine Vreugdenhil graduated from her PhD and took up a Postdoctoral Fellowship at Cambridge University.

Craig McConnochie graduated from his PhD and took up a Postdoctoral Fellowship at Woods Hole Oceanographic Institution.

Alice Barthel graduated from her PhD and took up a Postdoctoral Fellowship at Los Alamos National Laboratory.

Dr James Munroe visited the group for the duration of 2017 from Memorial University, and built a new framework to analyse ocean model output.

Dr Claire Carouge remains as a long-term visitor from UNSW, heading the Computational Modelling Support team for the ARC Centre of Excellence for Climate Extremes.

Andy Hogg is an editor for Geophysical Research Letters.

Michael Roderick was a member of the selection committee for the Horton Medal of the AGU.

Ross Griffiths is an Associate Editor of the Journal of Fluid Mechanics.