Variations of wavespeeds detected in the Earth's mantle from seismic waves 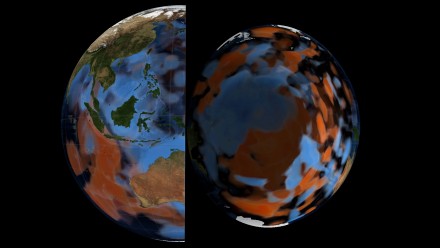 Geophysicists use methods of inversion to `see’ into the Earth and constrain subsurface properties and structure. Examples include the routine location of earthquakes and other seismic sources, to subsurface imaging with electromagnetic, heat flow, Airborne EM and seismic data sets. Geoscience Australia routinely collect large quantities of data sets and apply both standard and novel methods of inversion to them to determine Earth properties at depth. This research project will be aimed at exploring novel new approaches to this inversion problem, particularly aimed at dealing with either large geophysical datasets, highly nonlinear inversion, or uncertainty quantification. The project would suit a student with existing mathematical and computational skills willing to acquire and extend their expertise in a combination of statistics, mathematical optimization and data science, all applied within a real world application.

There are several existing research themes that could be adapted to the students interests. These are:

CoFI - A COmmon Framework for Inversion - we aim to build a software interface between a particular geophysical or geochemical forward and inverse problem. This would largely be a computational project where a student would build an interface for an existing forward or inverse problem computer code into the common platform. Once done they would be tasked with using it to explore properties such as accuracy robustness, computational efficiency and uncertainty.

New methods for nonlinear inverse problems - Here a student project would be aimed at testing some aspect of inversion algorithms that had not been previously explroed or well understood. Typically this might be testing out different classes of data misfit function for a particular problem, or different styles of inversion method. Thee is scope to explore new ideas here and experiment in a computational environment.

Monte Carlo methods: Here a student project would like to be to apply existing Monter Carlo methods and tools to aparticular adtaset or class of inversion or imagfing problem.

Variations of these projects are available and each will be adpated to the interests, experience and skills of the students.