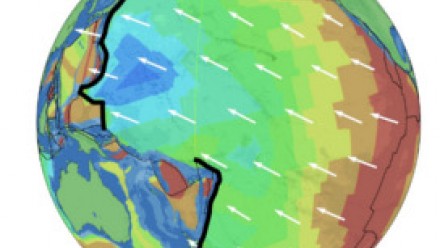 Computational (interfacing with observational data from a range of fields).

Geodynamics occupies a unique position in the solid Earth Sciences. It is primarily concerned with the dynamical processes affecting the Earth, both within its interior and at its surface, although it can also be applied to the interiors and surfaces of other terrestrial planets and their moons. Primarily, geodynamics exploits fundamental physical principles and wide-ranging observational datasets to interpret and predict Earth’s behaviour. It relies heavily on observational data from a range of fields (e.g. geology, geochemistry, geophysics, geochronology, some of which is acquired remotely and over long periods of time), in addition to laboratory data, and deals with Earth’s complex material properties. Indeed, many important geodynamical processes owe their existence to the interplay between complex material behaviour, dynamics, Earth’s structure and its thermo-chemical evolution.

The major paradigms shaping the solid Earth Sciences over recent decades are essentially geodynamical concepts. Perhaps the best known of these is plate tectonics and continental drift. These have stood the test of time, have been supported by observations from a range of disciplines, and are now widely-acknowledged as the basic phenomena governing the long-term evolution of Earth’s surface. Another fundamental paradigm is mantle convection: the basic engine for plate tectonics and the most important process controlling the structure and long-term evolution of our planet’s interior, including its temperature and composition.

Through their overall success in explaining diverse observations, these geodynamical concepts provide a foundation for much of the Earth Sciences, yet they raise fundamental questions that remain unanswered. These grand challenges fit within the broader context of the Earth System, for which an inter-disciplinary perspective will be vital for progress.