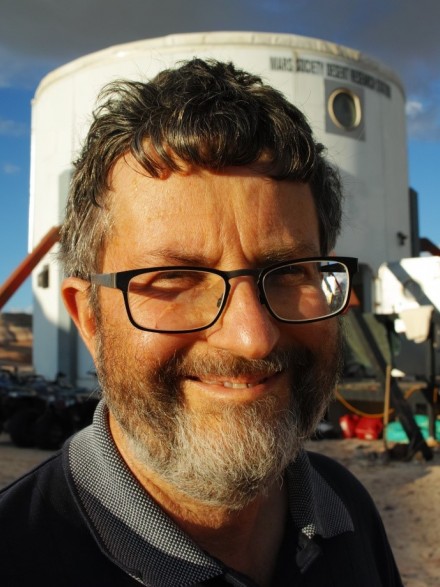 Jonathan Clarke completed a BSc Honours degree in geology from the University of Tasmania in 1981 and a PhD from Flinders University in Adelaide in 1988.  He spent 13 years in the resource exploration industry, working in field-based coal, oil, groundwater, trona, copper-lead-zinc, gold, diamonds, and copper-gold exploration projects across Australia, Chile, and the Philippines.  He has been engaged in geosciences education programs at the University of Tasmania, Flinders and Latrobe Universities, and at the Australian National University.  Jonathan spent 14 years working for Geoscience Australia in the marine survey, salinity, groundwater, and pre-competitive mineral exploration fields.

Jon has had a life-long interest in space exploration and planetary science. In 2001 he joined Mars Society Australia, becoming president in2012, a position he has held to the present.  Jonathan has taken part in six Mars analogue expeditions in Australia and one each to Ladakh (India) and New Zealand.  He has also participated in three rotations at the Mars Desert Research Station (MDRS) in Utah, two of two weeks and one of four weeks duration; and in the Mars 160 expedition which spent three months at MDRS and one month of Devon Island at the Flashline Arctic Research Station in the Canadian Arctic. Jonathan has been an associate of the Australian Centre for Astrobiology since 2004, an online instructor in astrobiology at Swinburne University (2017-2020, and an adjunct faculty member at the Amity Centre of Excellence in Astrobiology (ACoEA) since 2020.

Jon has contributed to more than 100 peer reviewed publications in geosciences, analogue research, and astrobiology.

Outside his professional career Jon has been a keen hiker and camper, off road driver, recreational and research scuba diver, and volunteer firefighter with the Guises Creek Brigade in the Australian Capital Territory Rural Fire Service.