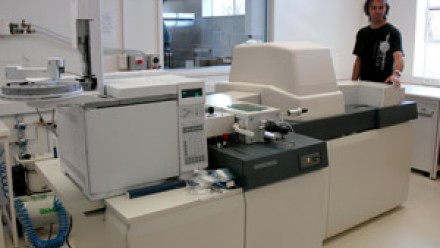 The figure shows an Agilent 6890 gas chromatograph (GC) coupled to an AutoSpec Premier (Micromass) mass spectrometer (MS). The AutoSpec is a highly sensitive   double-focusing magnetic sector mass spectrometer that is used to detect and identify traces of apolar chemicals such as lipids, pigments, toxins, drugs and fossil hydrocarbons that occur in complex mixtures that may comprise millions of compounds. This instrument has the capacity to quantify compounds at the nanogram scale with a high precision and reproducibility.

For instance, AutoSpecs are used in Olympic events for drug testing, and by environmental agencies to quantify dioxins in soil. In the biogeochemistry group at RSES, we use the AutoSpec to detect traces of extremely low concentrated hydrocarbons in bitumens and oils extracted from billion-years-old sedimentary rocks. A main strength of the AutoSpec is its dynamic range: it is possible to quantify compounds in a single run that have concentration differences of up to a factor of 100,000. The AutoSpec also offers accurate mass measurements to a resolution of 10,000 (for the determination of molecular formulae), selected ion recording (SIR), metastable reaction monitoring (GC-MS/MS MRM), daughter scans, neutral loss, full scan and MIKES.