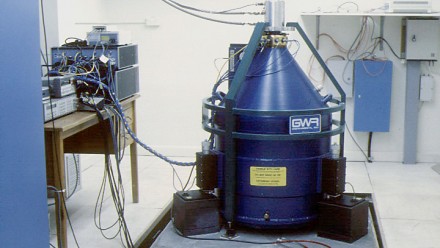 RSES operates a Superconducting Gravimeter at Mt Stromlo Observatory, continuously monitoring small changes in gravity caused by tidal, environmental and seismic effects. SG-CT031 is part of a world-wide array making precise observations of global gravity signals. Data is shared with other observers in the Global Geodynamics Project (GGP) network through The ICET data archive facility and used to study the dynamics of the Earth's deep interior and infer details of its internal structure. Continuous observations have been conducted at the site since 1997 with occasional interruptions.

The Mount Stromlo gravimeter is a GWR Instruments manufactured Compact Tidal Superconducting Gravimeter designated CT031. Operating at liquid helium temperatures, the instrument is built around a superconducting niobium sphere levitated in a magnetic field in an evacuated chamber. Gravity fluctuations are determined from changes in the feedback coil current required to precisely centre the sphere in its chamber. The SG is capable of detecting variations in the strength of Earth's surface gravity at the order of one part in 10^12 . The SG is extremely stable over long periods, and therefore ideal for normal mode, tidal and longer period observations.

Through the AuScope program RSES has acquired an FG5 absolute gravimeter and a portable gPhone spring gravimeter for continuous Earth tide recording. The FG5 will be used initially for monitoring the stability of core benchmarks across the Australian continent, providing reference points for ties to sea level monitoring stations, and for instrument calibration while the gPhone will be used to improve the accuracy of ocean tide loading models around Australia.

The Micro-g Lacoste FG5 gravimeter operates by measuring the free fall of a corner cube in a vacuum chamber using a highly stable laser interferomenter and a Rubidium clock. It is capable of 2-3 microgal accuracy in 24 hour site occupations.

The portable tidal gravimeter is a gPhone, also manufactured by Micro-g Lacoste. The gPhone is a metal spring relative gravimeter derived from geophysical survey instruments but specifically optimised for measurements in the tidal frequency band by component screening, improved the temperature stability with double oven controls and better vacuum seals for improved pressure stability. In addition the gPhone is equipped with a precise GPS locked Rubidium clock for accurate timing of the phase of tidal constituents.