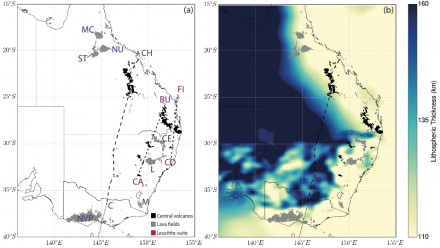 Most of Earth’s volcanism is concentrated at tectonic plate boundaries, where plates move away from one another to create mid-ocean ridges, or where one plate slides beneath another to form a subduction zone. However, an important and widespread class of volcanism occurs within plates, or across plate boundaries. These so-called intra-plate volcanic provinces, which include the most rapid and voluminous volcanic episodes recorded in Earth’s history, are often associated with mantle plumes, hot buoyant columns that rise from Earth’s core-mantle-boundary to its surface.

Mantle plumes are responsible for many of the volcanic tracks that extend across the Australian continent and have also played a central role in: (i) the evolution of Earth’s surface and its deep interior; (ii) global mass extinction events; (iii) initiating the seafloor spreading that produced many of the world’s oil and gas basins; and (iv) the genesis of large nickel, platinum and diamond deposits. Nonetheless, despite the significance of plume-related magmatism, both regionally and globally, a key aspect of the relationship between mantle plumes and surface volcanism remains enigmatic: the mechanism by which a rising plume interacts with, and eventually displaces the lithosphere – Earth’s rigid outermost shell - to reach the low-pressure regime required for melting, is not understood. As a result, it is impossible to interpret the geological record of mantle plumes, which is critical if we are to understand the origin of Earth’s intra-plate volcanic provinces, their associated volcanic hazard, the long-term evolution of Earth’s surface and interior, and the role of plumes in global mass extinction events, continental-breakup and mineralization.

It is becoming increasingly evident that several of Earth’s intra-plate volcanic provinces cannot be explained by the mantle plume hypothesis. The Australian continent hosts many examples, some of which have spawned recent volcanism near major urban centres. These provinces are best explained by alternative mechanisms, involving the interplay between mantle flow and the base of Earth’s heterogeneous lithosphere. The applicability and relative importance of these mechanisms, however, is unclear, and likely varies from one geological setting to the next. Furthermore, our understanding of the interaction between these shallow processes and deep-rooted mantle plumes remains in its infancy, despite observational evidence for complex interactions at Earth’s surface. There is no doubt that Earth’s intra-plate volcanic engine is fuelled by the interaction between mantle flow and the shallow lithosphere. However, the fundamental mechanism(s) underpinning this volcanism remain unknown.

The overarching aim of this project, therefore, is to develop a transformational new paradigm of intra-plate volcanism on Earth. To do so, we will build upon our recent multi-disciplinary studies on Cenozoic intra-plate volcanism within Australia (Davies & Rawlinson, 2014; Davies et al. 2015a), using advanced numerical models, in combination with ever-growing observational datasets from geology, geochemistry and seismology. Our research project will comprise three associated thematic areas. In the first, we will use the Fluidity computational modeling framework, which allows for the inclusion of Earth-like material properties and provides a local mesh resolution that is considered intractable for many other codes, to answer two far-reaching questions: (i) how do mantle plumes interact with and eventually displace the overlying lithosphere? (ii) how­­ does this displacement impact on the extent, rate and volume of partial melting, and how is this reflected in the geological record?

Results will be validated via comparisons with the melt volumes, melt production rates and melt compositions inferred from the plume-related volcanic chains of eastern Australia. The project’s remaining themes will focus on the intra-plate volcanic provinces that do not conform to the mantle plume hypothesis. Specifically, we will further develop the inter-disciplinary seismological and geodynamical approach of Davies & Rawlinson (2014), to determine: (i) which intra-plate volcanic regions are products of shallow, lithosphere-controlled mechanisms, such as edge-driven convection and shear-driven upwelling? (ii) how do plumes interact with these shallow processes and how is this manifest at Earth’s surface?

The northwards migrating Australian continent provides the ideal natural laboratory for tackling these fundamental questions, whilst the slowly rotating African continent provides a perfect complement and, hence, our project will focus on these geographical regions. Results, nonetheless, will be globally applicable, allowing us to relate, for the first time, wide-ranging geological and geochemical observations from intra-plate volcanic provinces at Earth’s surface to the underlying driving mechanisms, in an Earth-like, geodynamical framework.