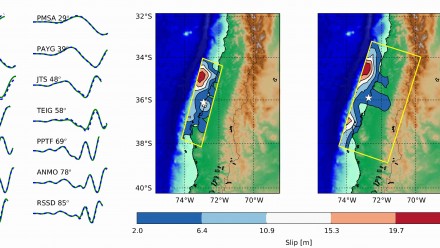 The W-phase is a ultra-long period seismic wave that arrives as early as the first-arriving P-wave. It’s early arrival, low amplitude and stability w.r.t. details of earth structure make it ideal for rapid determination of source characteristics especially for large, tsunamigenic earthquakes. We are exploring the ability of W-phase waveform inversions to recover a first-order coseismic slip distribution for large earthquakes, because it promises to be simpler than most other methods and may have applications in tsunami warning systems. We have applied W-phase finite fault inversion to seismic waveforms recorded following the 2010 Maule earthquake (Mw = 8.8) and the 2011 Tohoku earthquake (Mw= 9.0). As indicated in the figure, our results describe well the main features of the slip pattern previously found for both events. This suggests that fast slip inversions may be carried out relying purely on W-phase records.