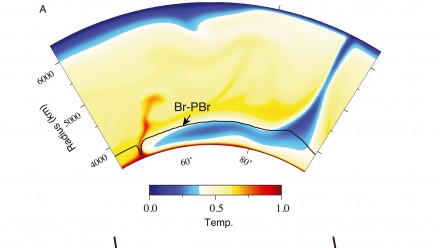 Observations of seismic phases sampling the lower mantle have suggested Ultra Low Velocity Zones (ULVZs), a possible perovskite to postperovskite related D” layer, Large Low Shear Velocity Provinces (LLSVPs), and rolling-hills of primordial material on the core-mantle boundary (CMB). Considerable progress has been made toward developing dynamical and mineralogical based mantle models compatible with seismic observations at the deep mantle, yet many details are still missing. It is still uncertain whether the densities and velocities of ULVZs are related to possible partial melting or have a distinct chemical origin, but the information about physical properties needed to answer this question are poorly constrained. For example the major phase used in imaging ULVZs, SPdKS, is not particularly sensitive to density and the velocities have strong trade-off with the shape of the structures. Other seismic observations have shown connections between the geographic distribution of the observed D” layer: where the post-perovskite layer is thickest beneath fast regions and disappears beneath slow regions. However, it is difficult to distinguish the velocity gradient effects caused subducted oceanic lithosphere at the base of the mantle from phase boundary effects.  The data set from USArray and other arrays, especially the greater PICASSO array, display waveform complexity at all ranges with remarkable coverage.  This grant will provide funding to better constrain mantle structures and answer questions such as: (1) Can we resolve and distinguish between the trade-off of different elastic properties? (2) Can we determine the 3D geometry of the ULVZ’s? (3) Are there other types of low velocity zones besides ULVZs existing at CMB? (4) How compatible are the inferred slab histories with the presence of lower mantle structures? (5) What is the relationship between D” and slabs in the deep mantle? (5) How well can we resolve the edges of the LLSVPs?  To answer those questions, we will use array seismology techniques, waveform modeling and the newly developed Multi-Pathing Detector (MPD) to sharpen current tomographic models and produce synthetic seismograms that match observed waveforms complexities. The physical dimensions of these structures in the lower mantle and their inferred seismic parameters will be used in geodynamic models of mantle convection and explored in mineral physics experiments at CMB conditions.  These further mineral physics and geodynamic experiments will allow for improvement in our understanding of the connection between subducted slabs, the D” layer, ULVZs, and LLSVPs and the dynamic evolution in the deep mantle. The differential time between S and SKS, TS-SKS(Data-PREM), for event C. The abrupt ~4 s jump between the western and eastern stations suggest a velocity boundary. (B) TS-SKS(Data-PREM) values mapped to the SKS piercing points at CMB (black symbols) and S turning points (white symbols) together with the tomography model S40RTS [Ritsema et al. 2011] and GyPSuM [Simmons et al., 2011] at the base of mantle (from Sun and Miller, G3, 2013).

University of Science and Technology of China