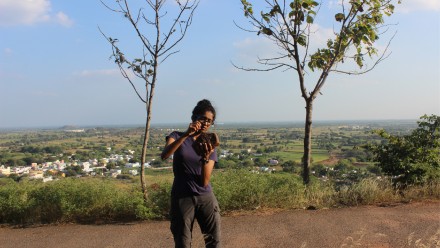 Durgalakshmi is analysing some of the few remaining ancient rock formations from the earth’s Archaean eon. The Archean eon spans the enormous period of 4-2.5 billion years ago, and the current evidence suggests that it gave birth to life on earth. It was also at this time that the earth’s crust was forming, a process which Durgalakshmi’s research is trying to understand.

The search for Archean rock samples has involved traveling to remote locations in India to obtain samples.

‘That’s one think I like about Earth sciences, it takes you to places that not many people can reach or see because the rocks I study are in some remote areas.  I've been to so many far off places where you get to see the people living there and it’s very different from what you see in cities or the place that you come from. It gives you a very different perspective on life.’

Field work is only part of the picture as Durgalakshmi then takes these samples to be analysed in the ANU’s Sensitive High Resolution Ion Microprobe (SHRIMP) machine.

Originally conceived and built in ANU in the 1970’s, this highly advanced machine allows people like Durgalaksmi to apply a uranium-lead dating technique to determine their age.

‘SHRIMP is the most exciting thing, I just love the machine, everything about it. I think working with and getting to know the inside of the machine was very exciting. Every time when I get to see the chamber opened and look into it and see all the stuff going on, that's what drives me. I think oh my god this is so cool.’ 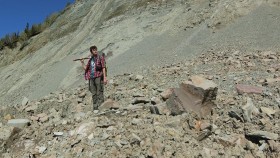