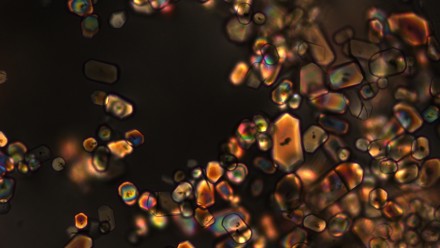 Crystals of olivine, the main mineral of the mantle, can be grown in the lab to study igneous processes

Background: Experimental petrology is about subjecting rocks and minerals to pressure, temperature and other conditions that occur in the earth, in order to investigate and understand processes that lead to diverse processes including magmatism and volcanism, plate tectonics, ore deposit formation, formation and differentiation of the Earth and many others.

Diffusion of trace elements in olivine
Experimental studies of diffusion not only constrain timescales of magmatic processes, but also provide insights into the point defect structure of forsterite.

Stability of accessory minerals at high pressures and/or temperatures
The behaviour of sediments and other crustal rocks at high pressures and temperatures is often not well known. The stability of important accessory minerals (e.g. zircon, monazite, sulfides) in metamorphic rocks and granitic melts, and and the interactions between crustal rocks and the peridotitic mantle surrounding subduction zones all require experimental constraint.

The basalts of NSW
A variety of basaltic lava fields and intrusions (dykes and sills) occur throughout NSW, both at the coast (e.g. Bingie Bingie Point, Dolphin Point, Snake Bay, Long Reef, North Bondi) and further inland (e.g. Tumbarumba). There are many unresolved aspects of these lavas that deserve further attention. For example, the ages of the coastal dykes and sills are unknown, but assumed to be Tertiary and associated with rifting of Australia from New Zealand. The problem with this model is that most of the dykes are oriented E-W whereas extension associated with rifting would have produced fractures oriented N-S. A second example is the lavas around Tumbarumba, notable for containing gem-quality corundum (ruby and sapphire). What is the petrological relationship between the gems and the lavas, and can the location of these gems be predicted in the wider region?

Trace elements in minerals
By a combination of experimental growth of minerals at high temperatures and/or pressures, lab-based microanalysis and synchrotron-based spectroscopic techniques, it is possible to understand the crystal chemistry of geologically important trace elements, for example: 1) How is Ti distributed between different crystallographic sites in garnet, and how is this controlled by pressure, temperature, oxygen fugacity and garnet composition? 2) Copper is found in gem plagioclase crystals (sun stones) at very high concentrations in basalt. Why does Cu partition into plagioclase and under what conditions? And in porphyry copper deposits it has been proposed that Cu only partitions into Al deficient plagioclase crystals. Is this true, and if so, is this an exploration tool?

Measuring Fe3+ in silicate minerals
Development and application of the electron probe-based flank methods to determining Fe3+ in garnets, spinel and pyroxenes. This will allow constraints to be placed on how oxidising or reduced the earth’s mantle and its partial melts are.

Redox state of the Earth’s mantle
The redox state of the Earth’s mantle, particularly its Fe3+/Fe2+ ratio, controls its seismic properties, trace element distributions and the stability of diamonds. There are many opportunities for research in this area, for example: 1) Do garnet peridotite xenoliths in kimberlites erupted over a large part of geological history record secular variations in mantle oxygen fugacity and in metasomatic processes? This question will be addressed by studying the mineralogy, chemistry and oxygen fugacity of suites of garnet peridotite xenoliths hosted in kimberlites of various ages, emplaced into the Kaapvaal craton in southern Africa. 2) An experimental study to investigate how ferric iron contents of ultra-high pressure majorite garnet varies with oxygen fugacity over a range of pressures and temperatures relevant to the mantle transition zone (depths of 410-660km).

High pressure experimental melting of peridotite at P=4 GPa
There are limited data relating to the precise, low degree partial melt compositions of the mantle at pressures above 4 GPa. This project will use special high pressure equipment and techniques to investigate this and apply it to formation of primitive mafic and ultramafic magmas (e.g. picrites, komatiites, etc).