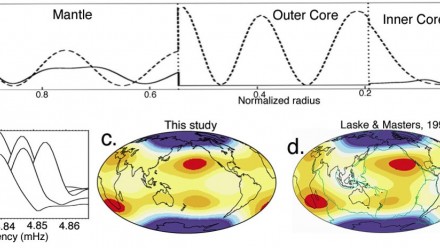 Free oscillations (also called normal modes) are vibrational patterns of the Earth. Normal modes sense the long-wavelength structures of Earth’s interior depending on the type and mode of vibration. For example, 13S2, a spheroidal mode with radial order 13 and angular order 2, samples the Earth along its radius from the mantle to the inner core (Fig. 1a). The normal mode spectra are split into a number of spectra (Fig. 1b) due to 3-D heterogeneity, rotation and ellipticity of the Earth. The radial average of the structure sampled by a mode can be expressed in terms of frequency and visualized through spitting functions (Fig. 1c, d). The estimation of splitting functions from normal mode observations is strongly non-linear and can be inherently non-unique (many models explain data equally well). Traditionally, the inversion is linearized and solved in an iterative fashion provided that the earthquake source model is known. However, point-source approximation is often inadequate for large earthquakes used in normal mode analysis. In addition, a large number of earthquakes are required to constrain Earth’s structure.

Therefore, we apply a parameter search approach using Neighbourhood Algorithm (NA) (Sambridge, 1999) to estimate the splitting functions. After testing the feasibility of NA, we apply it to the waveform data for 13S2 mode. Example data (i.e., receiver strips) are shown in Fig. 1b. Receiver strips are the set of spectra obtained after stacking spectra from stations around the globe and removing the station location information from the spectra. Inversion results suggest that splitting functions can be constrained by only two earthquakes, which is an improvement in comparison with previous work. Moreover, our approach does not require the knowledge of the earthquake source model. Splitting functions of this mode are dominated by the spherical harmonic degree-2 axisymmetric structure and agree well with the previously published results using nine earthquakes (Fig. 1c, d).