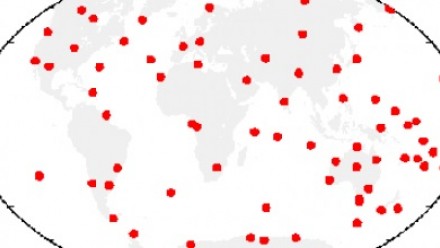 Tide gauges are used to measure the rate of change of the ocean surface relative to the land (relative sea level). The vertical movement of the tide gauge itself needs to be considered before such observations can be used to estimate variations in regional or global sea level. Space-geodetic techniques such as the Global Positioning System can be used to measure movement of the continents - which may arise through natural processes such as isostatic adjustment, subsidence, deformation near locked plate boundaries - but to attain an accuracy of < 1 mm/yr great care must be taken in the analysis. Issues of significant importance include the effects of elastic deformation of the Earth's surface from atmospheric pressure and ocean tide loading, the retardation of the transmitted signals as they pass through the atmosphere, modelling the trajectory of the satellites in their orbits, electrical phase properties of the ground-based antennae. Once accurate estimates of land motion can be assimmilated into the analysis of tide gauge records the long-term sea level trends can be estimated. Such estimates can then be used to compare/calibrate decadal-scale estimates from satellite altimetry.