River systems hold information on tectonic history in both the material they carry and their morphology. Coupled models of tectonics, topography and surface evolution help us to understand continental deformation patterns 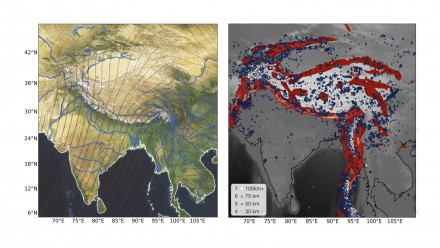 Consider the Himalayan mountain belt, which is the result of subduction zone congestion by the buoyant and deformable continental crust. The continental collision results in the dramatic topography of the region as the crust is shortened and thickened (see the Figure). The stratigraphy, cooling history, and metamorphism of the rocks allows us to infer the history of the uplifted surface which is recorded by rocks in crumpled and overturned units. It is also indirectly recorded in the sedimentary record as rivers and glaciers carry material away from the mountain belts and into sedimentary basins.

In sedimentary basins, accumulated detritus from the landscape stacks up, burying older material and creating a stratigraphic record of the topographic erosion. The difficulty in inverting this record to reveal the history of geological deformation is that the transport of eroded sediment can occur over long distances, is very dependent on the history of the topography, can be quite variable in time and space, is sensitive to very small-scale processes, and is coupled to the large-scale deformation. For example, the lengthy, tortuous pathways that the major rivers draining the Himalayas have to take to reach the ocean are clearly influenced by the topography rising and translating beneath the streams and rivers as they cut their channels

The Basin Genesis Hub (BGH) is a research centre focused on developing tools for modelling coupled thermal, mechanical evolution of basins together with the evolution of the surface drainage, sediment pathways and large-scale subterranean fluid flow. These tools are all open source and available for application to any basin setting around the world. Many of the BGH tools were developed by the ANU group which means we have access to the latest simulation software for this project (see https://uwgeodynamics.readthedocs.io/en/latest/ for inspiration). The coupling between surface evolution, tectonics and groundwater links geology, geodynamics and environmental science and the projects will provide training in  how to run numerical models and will provide in cloud computing, supercomputing and python.

This is a flexible project that could suit honours, masters or a PhD student and can be tailored to different applications, tectonic setting, or geographical region of interest. It offers plenty of opportunity to collaborate across the school and with groups from outside ANU. Some previous work in this area includes: